One woman-led cleantech venture will receive $1M to advance and commercialize its technology. The funding will come from MaRS Discovery District, an innovation hub in downtown Toronto, in partnership with Natural Resources Canada (NRCan).

In 2018, MaRS put out a national call for applications for the Women in Cleantech Challenge. The hub received 147 applications over two months, and eventually narrowed the selection down to six finalists.

The six finalists will spend in total over 2.5 years advancing their technologies and building commercially viable businesses before a winner is chosen, based on the entrepreneur who has made the most progress and the greatest market impact. The finalists are currently about 1.5 years into the challenge. A review of their projects and progress so far provides valuable insight into the growth and innovation in the cleantech industry in Canada.

What is Driving the Women in Cleantech Challenge?

Women in tech are under-represented, but especially so in the cleantech sector. According to an article in The Globe and Mail, “Where women do have a presence, they typically occupy junior roles in marketing, communications or finance, not senior roles in engineering or in the C-Suite.”

The same article points to a survey on startups by The Boston Consulting Group that concluded that female entrepreneurs raised, on average, less than half of what their male counterparts raised in early-stage capital, despite the fact that startups run by women perform better, returning $0.78 per dollar of investment during their initial years vs. $0.31 per dollar for startups run by men.

Support for women in cleantech is essential not just to foster women’s economic empowerment, but also for the sake of the environment. According to Women in Cleantech Challenge juror (and iconic Canadian author), Margaret Atwood,

“We’re not going to get a clean planet without the participation of half of the population.”

Atwood adds that women are more likely to ask and answer questions in relation to technology such as, “Is this going to make life better or worse for my children when they grow up?” and “Do I want a planet that’s habitable for human beings?”

Applicants for the MaRS Discovery District Women in Cleantech Challenge have been narrowed down to six finalists.

Evelyn Allen has developed a manufacturing platform for producing large-area nanofilms made of graphene and other 2D materials. Such films are increasingly being used in water purification, energy storage, corrosion prevention, sensing, and smart packaging. The process that Allen has developed is more energy-efficient and will be much less costly than existing approaches.

Allen is currently undertaking a paid project with a power-producing company and material company to validate her company’s nanofilms for specific use cases.

Amanda Hall has developed an improved process for extracting lithium from produced brine water. The approach has the potential to create an inexpensive and sustainable source of green lithium.

The new process could help provide batteries for electric vehicles, portable devices, and mobile gadgets—all of which are fast-growing, multibillion-dollar markets.

Hall’s company, Summit Nanotech, was selected as a Top 30 Startup of 2019 by the National Angel Capital Organization.

Julie Angus has developed autonomous solar-electric boats that will transform oceanographic research, marine transportation, oil and gas, and defence industries. The boats will carry environmental sensors, cameras, and communication devices that will allow them to collect ocean data, act as communication gateways for sub-sea sensors, and more.

Angus’s company has completed its pre-seed financing round and will undertake piloting shortly.

Nivatha Balendra has developed a method for remediating oil contamination—such as spills or tailing ponds—using biodegradable lipids. The lipids break down hydrocarbons in a sustainable manner, unlike conventional approaches that rely on chemical detergents that are harmful to the environment.

Balendra’s company, Dispersa, was chosen as a finalist to represent Canada at ClimateLaunchpad (Amsterdam), the largest cleantech competition in the world.

Alexandra Tavasoli has developed a process for turning carbon dioxide into fuels, using the power of the sun and unique, nanostructured, light-activated materials called “photocatalysts.” The approach could prove a powerful, energy-efficient way to turn CO2 captured from power plants or the atmosphere into clean chemicals and fuels.

The process for capturing CO2 could amount to the equivalent of taking 1,000 cars off the road each year.

Tavasoli is a PhD candidate in the University of Toronto Solar Fuels Group. Her goal is to make her company, Solistra, both a humanitarian and public-service chemical engineering enterprise, working on projects to make communities more sustainable.

Luna Yu has developed a solution that allows food waste to be diverted from landfills and converted into biodegradable plastics and other high-value materials at a low cost. The plastics can be used in the manufacture of packaging films, bags, containers, and utensils, in industries that include food services, agriculture, textiles, and others.

Yu has commissioned a new pilot facility for her company, Genecis, and has completed her fundraising round.

What’s Next for the Cleantech Finalists?

During the 30 months of MaRS’s program, finalists will attend workshops and events, receive expert advice, meet investors and potential partners and customers, work with federal researchers, and gain access to advanced equipment in order to develop and validate their technologies.

A variety of Canadian government funding programs provide support for cleantech projects, including Sustainable Development Technology Canada, the Industrial Research Assistance Program, and the Agricultural Green Technology Program. In fact, over the past two to three years, numerous cleantech projects have received millions of dollars in Canadian government funding, demonstrating the federal government’s prioritizing of this industry.

Learn when you should apply for Canadian government funding by downloading our free slide deck on this topic. Find coronavirus funding support programs from the Canadian federal and provincial governments by visiting our COVID-19 support page. 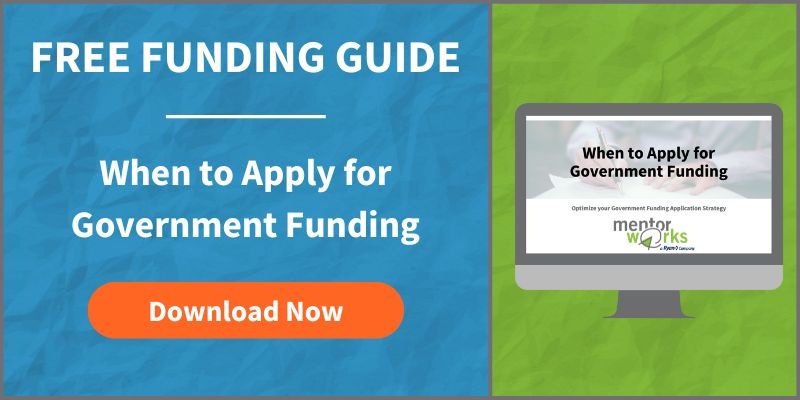 Find the Right ERP System and Fund It With Grants