With the video game industry seeing a sharp increase in sales of the COVID-19 pandemic and the stay-at-home orders, the Canadian government wants to help support the development of innovative video game development studios.

Canada is home to some larger-than-life video game studios, such as the Edmonton-based BioWare, which has created game franchises including Mass Effect, Star Wars: Knights of the Old Republic, and Dragon Age. Ubisoft, the French video game publisher, has multiple locations throughout Canada including Montreal, Quebec City, Halifax, Winnipeg and Toronto, and has delivered award winning games such as the Assassins Creed series, Tom Clancy’s Rainbow Six games, and the Far Cry franchise. Smaller or “indie” game development studios also find their home in Canada, including Extremely OK Games (formerly Matt Makes Games), whose breakout game Celeste won a number of awards as well as Game of the Year nominations form various outlets, and the studio Red Barrels who continue to develop the popular Outlast game franchise.

The barrier to entry in the video game development industry has also been lowered, with independent game studios, known as indie games, being widely supported and popularized on storefronts such as the Nintendo eShop, Steam, the PlayStation Store, the Microsoft Store, the Apple App Store, and the Google Play Store.

With that being said, the coronavirus has taken its toll on the gaming industry. Sony, Microsoft, Nintendo, and other gaming hardware manufacturers that have had consoles or graphics cards release in the past couple years that have been in extremely high demand with low supply due to the ongoing microchip shortage. Many video game development studios have also reported delays for their game releases into next year, citing the challenges brought on by the pandemic as a reason for their delay.

In this article, we look at the funding programs provided by federal and provincial governments to support studios with the conceptualization, development, and promotion of a Canadian-made video games. If you believe your business is eligible for any of these Canada small business loan programs, we can match funding with your gaming projects and discuss next steps.

Most video game developers will have one or multiple games being worked on at any given time and can cost anywhere from $500 to $300,000,000 to develop. With the cost of developing video games varying so greatly, it’s no wonder why government funding incentives exist to help with the creation process and increase the scope and polish of games of all sizes. The following section focuses on the top incentives and funding programs offered through the Canadian federal government.

Amount: Tax credit of up to 69% of labour and overhead costs, 36% of contractor costs, and 45% of material costs. All expenses must be commensurate with the needs of the scientific research and experimental development activity taking place within the company.

Eligible Businesses: Organizations must be conducting experimental development or basic/applied research in Canada and be capable of tracking and reporting resource allocation to eligible research activities.

Eligible Projects: The SR&ED program can include labour costs, external contractors’ costs, materials, and overhead costs that directly relate to the eligible project. Projects must attempt to resolve an obstacle, challenge, or technological uncertainty and be focused on exploratory research.

Those businesses eligible for funding can apply up to 18 months from the end of the tax year that the expenses were incurred.

The National Research Council (NRC)’s Industrial Research Assistance Program (IRAP) is a business research grant offered through the Canadian federal government designed to support the research and development process of innovative made-in-Canada technologies with a level of technical risk and uncertainty. This program would be relevant to those developing an innovative new game or software that is seeking to have its research and development supported through government incentives like small business loans Canada. The intellectual property (IP) created as a result of the project would stay with the applicant.

Amount: Grants of up to 60-80% of internal labour costs and subcontractor expenses.

Ontario is home to many video game development studios such as Rockstar Toronto, Capybara Games, and Ubisoft Toronto that have created massive hit games achieving global popularity. The video game industry accounts for a significant portion of the province’s economic activity and the Ontario provincial government has taken notice. As a result, the province offers multiple long-standing funding programs to help kickstart and expand the development of new video games, as well as the promotion and reach of Canadian-made games in new markets.

Ontario’s Interactive Digital Media Fund (IDM) is a provincial government grant program that supports digital media developers in conceptualizing new digital media products, as well as the development and commercialization of those products.

The Ontario Interactive Digital Media Tax Credit (OIDMTC) is a refundable tax credit that can be put towards eligible labour, marketing, and distribution expenses. This program is open to established Ontario-based corporations that develop interactive digital media. The OIDMTC is administered by Ontario Creates and the Canada Revenue Agency (CRA).

Amount: Up to 40% of eligible labour, marketing, and distribution expenses towards internal activities, with up to 35% for fee-for-service arrangements.

There is no overall funding cap for this program, however funding towards marketing and distribution expenses are capped at $10,000 per product.

Once a video game has been developed it must compete with the other games listed on multiple storefronts. This includes both retail shelves, as well as virtual storefronts such as Steam, Epic Games, PlayStation Store, Nintendo eShop, Microsoft Store, and more. Therefore, the Canadian government is introducing funding programs to help with the promotion of games that have been released.

As listed above, the SR&ED program provides retroactive tax credits for video game projects that have been published. Learn more about SR&ED funding, as well as stacking funding with Provincial and Territorial SR&ED variants.

The CanExport SME program can help your video game studio conduct marketing activities in foreign markets outside of Canada by accessing CanExport grants for related projects.

Eligible Businesses: For-profit businesses must be incorporated for more than three years, with less than 500 employees, and have between $100,000-$100M in Canadian annual revenue.

Eligible Projects: Market research, IP/product certifications, marketing tools, and website SEO. Trade show and travel related costs for new markets, however these costs may be ineligible if there is a travel advisory in those markets.

Whether your video game development studio is conceptualizing a new game, developing a game, or planning the promotion of a game launch, there are Canadian government grants, loans, wage subsidies, and tax credits that might be relevant.

If you believe your business may be eligible for funding through one or more of these programs, contact a member of the Mentor Works team for application assistance. Our team of government funding writers provide an estimated 95%-time savings compared to organizations that apply for funding in-house.

Video game development studios are a fantastic fit for receiving grant funding through the IRAP program, as well as tax credits through the SR&ED program. Get to know both programs and how your business can access them by downloading our free IRAP Vs. SR&ED Guide. 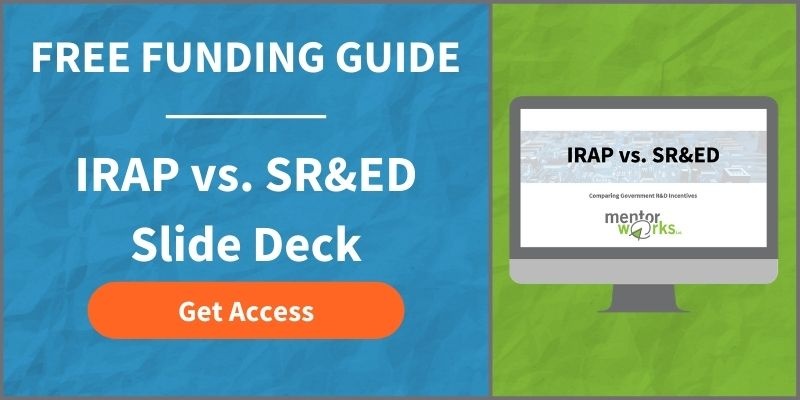